It’s interesting being a spectator to this as a former nurse and former CRNBC registrant, particularly watching the issue develop over social media platforms. I’ve seen a lot of outrage about this increase, much of it criticizing CRNBC for spending nurses’ fees on a fancy waterfront office. Others accuse CRNBC of doing nothing for nurses yet charging such high fees. While my goal here isn’t to criticize what CRNBC does (although I won’t let them off lightly), it is important to understand where this money goes.

For six years the CRNBC fees have been stable.1 The increase in 2017 wasn’t actually an increase in CRNBC fees because the entire amount a nurse pays when renewing their license does not go to just CRNBC. The increase in 2017 went to two things. First, there was an increase of $12.00 to the funds allocated for the Canadian Nurses Association and the Association of Registered Nurses of British Columbia (ARNBC). In a YouTube video ARNBC attributes this increase in fees to be due to the lawsuits BCNU has raised against them.2 But that’s a blog post for another time.

The increase was also due to the addition of personal liability protection (PLP) through the Canadian Nurses Protective Society (additional fee of $66.41). RNs in BC have had PLP since 2016, but it was paid for with existing funds that year. PLP is offered (and appears to be often required) by nursing regulatory colleges and/or associations across the country, and is not CRNBC singling out BC nurses. Currently BC nurses pay more for PLP because there is also a five-year supplemental fee ($29.25 plus tax) that protects BC nurses for liabilities prior to 2016.3 The final supplemental fee payment will be 2020.

In short, 2017 saw an increase of $78.41. While CRNBC collected this money, none of that was an actual increase to CRNBC fees.

According to CRNBC, these additional funds will be allocated as follows: 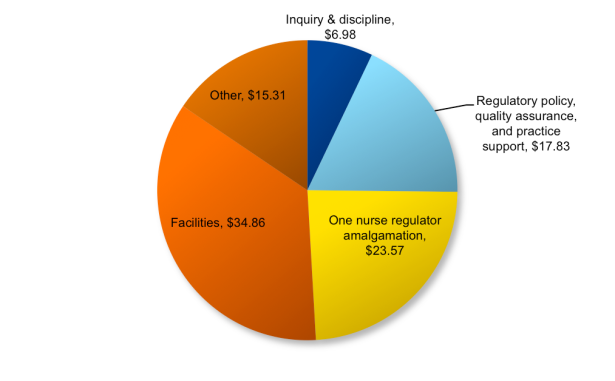 CRNBC explains these increases as follows:

“Work required to meet our regulatory mandate has increased. This includes responding to increasingly complaints, the complexity of the investigations, and implementing the quality assurance program. This led to hiring more staff and ultimately the need to move to a new location to accommodate our size. We are also anticipating additional work as we collaborate closely with CLPNBC and CRPNBC to amalgamate the three colleges.”1

Comparison to Other Provinces

Another comment I’ve seen a lot on social media is that BC RNs pay more than other provinces. This isn’t something I knew much about so – being a researcher – I naturally wanted to investigate.

While my inquiry found that BC nurses do pay more than most provinces, they don’t pay the most. That distinction goes to their colleagues in the North, who already have to deal with an outrageously high cost of living.

The above figures are listed on the CRNBC website,1 and I double-checked them with the actual websites of each regulatory body (and good thing too because the Ontario figure was incorrect.) While there seems to be a great deal of variation between renewal fees, this may be artificially high. CRNBC groups a number of fees together, while in other provinces they are paid separately. For example, the College of Nurses of Ontario’s renewal fee does not include PLP and membership in the professional association. Some Colleges also include GST/HST in their listed fees, while others do not.

Here’s a more accurate representation of what nurses across Canada actually have to pay out of pocket to be comparable to BC renewal fees (i.e. including registration renewal, PLP, professional association fees if applicable, and tax):

This brings the average cost of renewal up from $563.70 ($574.04 when PEI is not included) to $620.68. While there are certainly some outliers impacting this figure, it isn’t quite as far off from CRNBC renewal rates.

Concluding Thoughts and Calls to Action

Admittedly I’m not fully against the CRNBC fees being increased. Granted, I would probably feel differently if I was still paying for CRNBC registration. But CRNBC needing more money to address new challenges to practice and increased complaints seems logical. Plus there’s been no increase to CRNBC fees for six years. Fees are bound to increase due to organizational growth and inflation.

That being said, CRNBC acquiring waterfront real estate does sound like a rather extravagant use of funds. I’m not sure how true this claim is, but it is listed on their website that they are moving to downtown Vancouver.1 I certainly understand needing a larger space if the organization has expanded. I also understand not wanting it to be a total dump (that would be a bit embarrassing when there are visiting officials and scholars!) But perhaps a more realistic facilities budget needs to be considered.

Nurses upset about the fee increase can do a few different things:

The views on this website are my own, and are bound to change over time. My views do not represent the views of any institution or organization that I was/am employed with or hired by as a consultant.